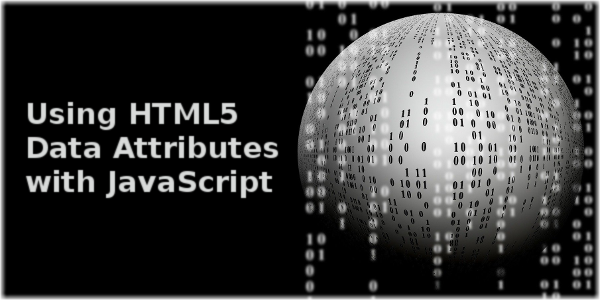 HTML5 gave us the ability to add arbritrary pieces of information to any element to use behind the scenes for any purpose you wish. These are known as data attributes and I put them to good use in my Interactive Periodic Table. There is plenty of information around on the topic but often with simplistic or contrived examples so here I will present a real-world usage with a simplified version of the Periodic Table.

You can add a custom data attribute to an element by hard-coding it into the HTML, prefixing the name with -data, for example:

Within JavaScript you can access an element's data attributes for reading and writing using its dataset property which is of DOMStringMap type and is basically a collection of key/value pairs. The keys are the names used for the attributes but without the data- prefix, so for the above example we would use manufacturer and model, as shown below.

It is also easy to find elements with certain data attribute values using querySelector, for example:

Finding the element for Nikon D6

Below is a screenshot of the simplified Periodic Table used for this example.

If you click on an element an alert is shown with the name, atomic number and chemical symbol of that element. You have probably guessed how we know which element* to show the details for: using its data attribute.

*I am going to have to use the word "element" quite a lot during this article. This is pretty annoying but I will try to point out whether I am referring to an HTML element or a type of atom unless it is obvious.

This project consists of an HTML file, a JavaScript file and a few subsiduary files, all of which can be downloaded as a ZIP or cloned from Github using the links below.

I won't show all the source code, just the bits relevant to data attributes. I have used them several times during this project but to avoid repetition I will just show where we carry out the following tasks:

To populate the table we iterate a list of elements, adding each to the table with a corresponding data-atomicnumber attribute.

Here I have used setAttribute instead of dataset.atomicnumber just to show the alternative.

After the table is populated we need to set the colours to indicate the element's categories. Again we iterate the data, finding the cell corresponding to each element like this:

As seen in the Nikon D6 example above you can use more than one selector if necessary. In this project we know that the data is static so we will always find a cell but if this is not the case remember to check the return value of querySelector for null. Also, you might need to use querySelectorAll if there can be more than one matching element.

Finally we need to pick up the data-atomicnumber attribute value when an element is clicked.

What is actually happening here is that we are calling the GetElement method of an instance of a class representing all chemical elements, picking up the dataset.atomicnumber of the target (ie the HTML element that was clicked) to use as the method argument.

So as you can see using data attributes greatly simplifies the process of both finding an HTML element when we need to do something to it (such as setting its colour) and identifying that element when a user interacts with it, for example by clicking on it.

When I started working on the Periodic Table it soon became clear that data attributes were the way to go. There are no doubt other ways to accomplish the same thing but I am not sure what they are as I never gave the matter any thought!

Thinking of Starting Your Own Blog?

If you are thinking of starting your own blog or looking to migrate to a better host check out BlueHost. Free domain name for 1 year, free SSL certificate and 1-Click WordPress Install.

The annual WP Engine Summit 2020 is just around the corner, taking place on June 10th and for the first time the event will be entirely virtual and free of charge.

PureVPN are offering a 7-day trial for only $0.99 with 31-Day Money-Back Guarantee.

Brighten up your laptop with a few stickers from Redbubble, buy 6, get 50% off.