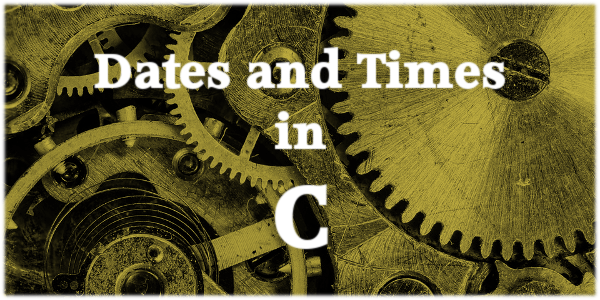 Every time I need to work with dates and times in C I find myself scrabbling around trying to refresh my memory on how the data structures and functions provided by time.h work. I have therefore put together a short program to demo the most important functionality, mainly as a reference for myself but I hope you find it useful as well.

Fortunately every mainstream language or framework provides us with off-the-shelf functionality for handling dates and times but even these are not entirely straightforward. This is particularly true with C so I thought I would provide myself with a few bits of sample code which I can copy and paste whenever I need, and also share with anybody else who might find it useful.

The C standard library includes time.h which provides us with a struct and an integer type to represent dates and times. These are combined; there are no separate types for dates and times. This makes sense when you think about it, as the separation between the two is entirely arbitrary and has no real meaning.

These are the two types used to represent dates and times.

Of course the two types show above both represent what is essentially the same information, albeit in very different forms. The standard library therefore provides us with functions for obtaining a variable of each type from the other.

For this project I will write three functions to illustrate the types and functions listed above.

The project consists of just one file called datetime.c. You can download it as a zip or clone/download the Github repository if you prefer. This is the first part.

The main function merely calls the other three functions.

I don't usually include a lot of comments unless something unusual is going on which needs an explanation, but as this code is intended mainly as a reference I have included comprehensive descriptions. Therefore I won't include details of the code in the text.

When you have read the code and comments compile the program and run it:

This is the output.

Note that tm_mon, tm_wday and tm_yday are zero-based, and that the year counts up or down from 1900.

After printing out the value of the time_t variable both as a number and a human-readable string I have printed tm_wday and tm_yday to illustrate that the mktime function sets these.

The mktime function also adjusts any values which exceed their maximum. For example if you create a tm struct with a date of 31 June then mktime will change it to 1 July. For this reason it is important to set all six date/time members even if you aren't interested in them. If you do not they will contain garbage values which mktime will use to adjust the members which you did set. (You don't have to look far to find complaints about this "bug"!)

In main comment out current_time();, uncomment create_time(); and build and run again. This is the output.

The fixed string format provided by asctime and ctime is OK for demonstration or perhaps writing to a log but isn't very flexible. The strftime function allows us to specify a format string so we can create a string with the various members of a tm struct in any order or format we want.

The format string can contain any number of specifiers consisting of the % sign followed by an upper case or lower case letter. I won't list all the valid letters but you might like to read this http://man7.org/linux/man-pages/man3/strftime.3.html.

Now take a look at the code which uses strftime on the current time with three different formats.

After getting a tm with the local time I have used strftime with three different format string examples. A few of the more common formats have single letter shortcuts, two of which I have mentioned in the comments.

In main comment out create_time();, uncomment time_to_string(); and build and run again. This is the output.

As you can see strftime provides as much flexibility as you need. Not only do the various % + letter specifiers let you format the members of a tm in any way you need but you can also include other characters or text in the output.