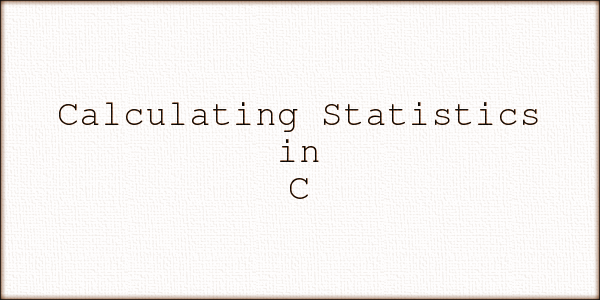 This is a relatively short and simple project which will calculate a few simple statistics from an array of numbers. It covers the most basic areas of classical statistics which might seem a bit old-fashioned in an era of big data and machine learning algorithms, but even the most complex of data science investigations are likely to start out with a few simple statistics.

At the heart of this project will be a struct to hold each of the stats we will be calculating, and a function which will calculate the stats and use them to populate a struct when we thrown an array of data at it. There will also be a few utility functions, and of course some code to test and demonstrate what we have written.

Create a new folder somewhere and then create the following empty files in it. You can download the source code as a zip or from Github if you prefer.

The statistics we'll calculate are the following:

Many of these are self-explanatory but a few might not be familiar so I will give a brief overview of those.

I am sure everyone understands the arithmetic mean: it is what most people think of as the "average" and is just the total of all numbers divided by the count. It is one of several values known as "measures of central tendency" which are intended to give an idea of a central or typical value. However, if the data is not evenly distributed this can give a distorted impression, so the median gives a better idea of a typical or central value. It is quite simply the middle value when the data is sorted into order.

The quartiles are examples of percentiles, ie. the values a certain percentage from the beginning and end of sorted data. Lower and upper quartiles are the values 25% and 75% along respectively. Their purpose is to complement or even replace the minimum and maximum values which might be what are known as "outliers", ie. they are significantly lower or higher than the main body of values and therefore give a misleading impression of the range. I have used the terms lower quartile, median and upper quartile, but the terms 1st, 2nd and 3rd quartile are also widely used. Quartiles are probably the most widely used percentiles but any percentage can be used, deciles (the 10th and 90th percentiles) also being commonly used.

Calculating quartiles and the median sounds simple, just make sure the data is sorted and pick the relevant values from it. However, it's not quite so simple because if there is an even number of values in the data there is no single middle value. In this case we take the mean of the two central values. Irrespective of whether the count is odd or even, the counts of the lower and upper halves may be odd or even, requiring the same approach as with calculating the median.

In order to show how the quartiles and median are calculated in each of the four possible permutations, I will show some sample data.

Secondly, the overall count is odd, but this time the count of the two halves used to calculate the quartiles is also odd so we just pick the middle values for the quartiles.

Lastly, the count is even but the count of the two halves used to calculate the quartiles is odd.

Measures of central tendency give no impression of how widely the data is spread so we will also calculate the range (maximum - minimum) and the inter-quartile range. The latter of course is useful in eliminating the misleading effects of any outliers. Such values are known as measures of spread and another is the standard deviation which deserves a section to itself.

The standard deviation can be thought of as the average (ie. mean) amount by which values differ from the mean. That is not a precise definition but it gives an impression of what it signifies. Of course the actual mean by which values differ from the mean would be 0 as positive and negative values cancel out. To get round this the variance is calculated using the squares of each value, and the square root is taken to obtain the standard deviation.

The standard deviation is a useful indicator in its own right but along with the variance it is also used to calculate other statistics such as various coefficients of skewness, as we shall see later, as well as in correlations and regressions and many other applications.

If you want a detailed description of standard deviation take a look at the Wikipedia article.

Another statistic we will calculate is a coefficient of skewness. I say a rather than the as there are plenty to choose from, the one I am using is Pearson's second skewness coefficient (median skewness). Again you might like to read the Wikipedia article for full details but briefly this gives an indicator of how assymetric the data is around the median.

To test our little statistics library we will need a few arrays. The median and quartiles are calculated in different ways depending on whether the number of items is odd or even, and on whether the count divided by 2 is odd or even. We will therefore need several sets of data of different sizes to test the various permutations, so we'll write a function to populate an array of the specified size with random data.

Let's get the code to create test data out of the way as it is rather boring.

Open data.h and enter the following.

Now we'll write the header file for the statistics library. This is quite straightforward but apart from the function prototypes it also includes a rather large struct to hold the statistics being calculated.

We can now start working on statistics.c which aside from the core calculate_statistics function contains a few simple utility functions. Let's get those out of the way first. (Note that there are a couple of static functions to be used internally, but as they are at the beginning of the file before being called we don't need function prototypes for them.)

The compare_doubles function is a comparator function passed to the qsort function. For more details on using qsort take a look at the article I wrote on the topic https://www.codedrome.com/using-the-c-librarys-qsort-function.

The is_even function uses the modulus (remainder) operator. If you divide an integer by 2 and there is no remainder then the number is even.

The output_data function simply iterates a double array and prints the values, for use in demonstrating and debugging the code.

The output_statistics function is very straightforward: it just prints the members of a statistics struct. Note that the "-" in %-33s left-aligns the string, padding it with spaces to the specified width.

We can now implement the calculate_statistics function. Rather than describe the code separately I have commented each main part.

Now all we need to do is write a bit of code to test the statistics. This involves nothing more than creating and populating an array of data and a statistics struct, passing them to calculate_statistics, and then printing the results. As you may have noticed, the calculate_statistics prints the data after sorting it which makes checking easier.

Because of the four different methods of calculating the quartiles and median we will need four sets of data of varying sizes to test them. I have chosen 9, 10, 11 and 12, and also included a larger data set of 138 values. The following code is the complete main.c.

Now compile and build the code by running the following commands in Terminal.

The output is rather long with all the data printed so I'll just show one of the small data sets.