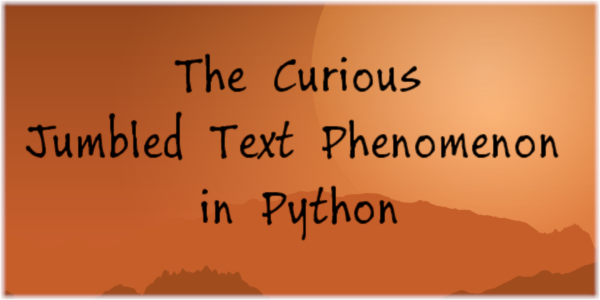 On your travels round the internet you may have seen pieces of text with all but the first and last letters of each word jumbled up but still easily readable. If you are tempted to try jumbling up words yourself then read on - in this article I'll implement a simple program in Python to do just that.

A bit of Googling for phrases like "jumbled text" will bring up loads of examples, explanations and creation myths surrounding paragraphs such as:

“Aoccdrnig to a rscheearch at Cmabrigde Uinervtisy, it deosn’t mttaer in waht oredr the ltteers in a wrod are, the olny iprmoetnt tihng is taht the frist and lsat ltteer be at the rghit pclae. The rset can be a toatl mses and you can sitll raed it wouthit porbelm. Tihs is bcuseae the huamn mnid deos not raed ervey lteter by istlef, but the wrod as a wlohe.”

For example, this is just one article from the British newspaper The Independent.

The reason why this 'difficult' puzzle is so easy to read

Of course it's pretty easy to write a program to carry out such jumblings so let's do so . . .

This is the code for textjumbler.py which does the actual jumbling.

This is the public function and takes as arguments the text to jumble and the amount of jumbling to be done. This is a real value between 0.0 and 1.0, and specifies the proportion of the letters to be mixed up.

The jumbled_words list is used to assemble the finished result, and will consists of both the jumbled words and any other characters such as spaces and punctuation which are left as they are.

At the heart of this function is a loop which iterates the characters of the input text. If a character is a letter (tested with the isalpha method) it is added to the word variable. If not then we have come to the end of a word so this is scrambled using a separate private function, _scramble, and the result added to jumbled_words. We also append the non-alphabetic character and reset word to an empty string.

The text will probably end with a full stop or other punctuation mark but if not we need to scramble word and add it to jumbled_words.

Finally jumbled_words is joined into a string and returned.

This function scrambles the central letters of individual words. If the word has 3 or fewer letters it is just returned unchanged.

These are the variables involved:

Next we use a while loop to carry out the required number of character swaps. The actual characters to swap are chosen at random and, after checking the two random indexes aren't the same, the letters are swapped using three XOR or exclusive or operations.

Using XOR for swapping values is a nifty little trick which eliminates the need for a third temporary variable. Exclusive or or XOR is 1 when exactly one of the two bits being XOR'ed is 1, otherwise it is 0. This is the truth table.

So how does this help us swap values? The following snippet makes this clear. Note that in Python (and many other languages) the caret ^ is the XOR operator.

Notice the binary values after each operation, and that after the last two lines the values of a and b are swapped.

Back to our word-jumbling problem, where we need to swap letters, not numbers. Python won't let you use XOR on characters so we have to use the ord function to get the letter's ASCII codes, do an XOR swap, and then use chr to convert back to a letter.

After each swap we increment the loop counter i, and after the loop terminates the letters are joined into a freshly scrambled word. The else deals with the situation where the word has 3 or fewer letters, as mentioned above.

Now let's look at jumbledtextdemo.py in which we try out the above code on actual pieces of text.

The code is dominated by three big chunks of sample text. The second is the poem Ozymandias by Percy Bysshe Shelley, and the third is the opening paragraph of A Tale of Two Cities by Charles Dickens.

After these we simply call textjumbler.jumble and print the result. Here I have used 0.3 for amount; I have found that values of between 0.3 and 0.5 work best. Higher values tend to make the text a bit too hard to read comfortably.

This is an example of the output but due to the random nature of the jumbling yours will almost certainly be different.

It dseon't mttaer in waht odrer the letetrs in a wrod are, the olny ipmoatrnt tihng is taht the fisrt and lsat leettr be at the rgiht plcae. The rset can be a toatl mses and you can sitll raed it wutohit pobrlem. Tihs is beucase the huamn mnid dsos not raed eevry leettr by iestlf, but the wrod as a whloe.

You can run the program with the other two strings just by changing the variable name in the call to the jumble function. You can of course also use your own text and play around with the amount variable.