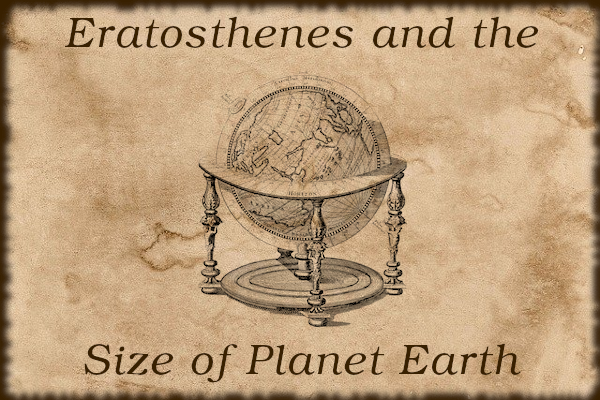 The Ancient Greek polymath Eratosthenes of Cyrene made the first serious attempt at calculating the size of the Earth. Using very simple observations and mathematics he achieved a surprisingly accurate result and in this article I will replicate his calculations in Python.

Eratosthenes of Cyrene (c 276BC to c 195/194BC) was chief librarian at the legendary Library of Alexandria. When he wasn't busy frowning and tutting at people for making a noise he took time out to calculate the size of the Earth.

He was aware that at the Summer Solstice (the time when the Sun is at its highest point in the sky) the Sun could be seen reflected in the water at the bottom of a deep well in Syene (now called Aswan, and not to be confused with Cyrene), meaning it was exactly overhead. At home in Alexandria, some way north of Syene, the Sun never gets this high so will never be reflected by the water in a well, and will always cast a shadow to the north of any object it shines on.

The diagram below represents a cross-section of a quarter of the Earth, with Syene and Alexandria at their correct latitudes. I have used poles instead of wells, and if you look at the second zoomed-in view you can see that at Alexandria the Sun casts a shadow, specifically one of 7° 12′ (7 degrees 12 minutes, or 1/60 of a degree) so this is the difference between the two latitudes. 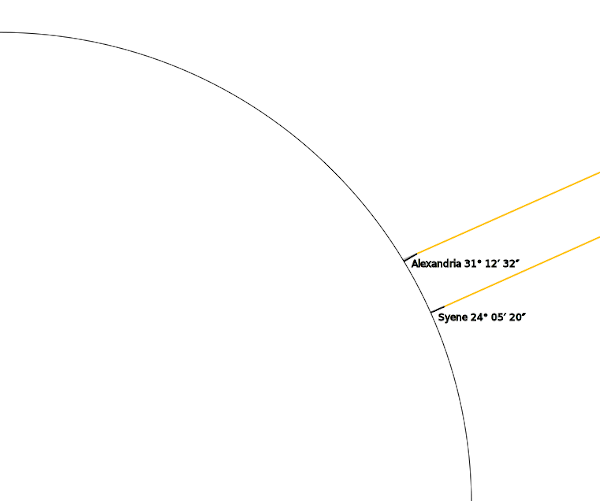 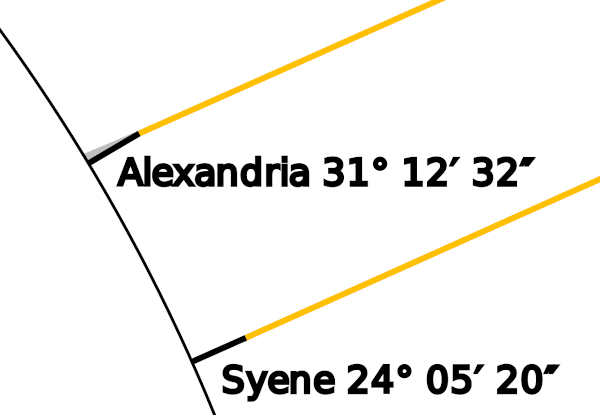 7° 12′ happens to be exactly 1/50 of 360°, meaning the distance between Syene and Alexandria is 1/50 of the total circumference of Earth. (He assumed they were on the same longitude which isn't quite true.)

Using Egyptian stades 5,000 is closer to the actual distance than if we use Greek stades, and also gives a more accurate estimate of the size of our planet so this is probably the unit he used. However, I'll do the calculations using both in the code.

Replicating Eratosthenes' methods requires some fiddly calculations with angles, specifically latitudes, so I have shifted these out to a separate class called Degree.

In eratosthenes.py I use the Degree class to implement the calculations described above.

This the Degree class which lives in degree.py.

The class stores an angle in seconds (or to be precise arcseconds, 1/60 of an arcminute) and provides a few handy methods. __init__ takes degrees, minutes and seconds (each defaulting to 0) and calculates and stores self._seconds using a separate function, _seconds_from_dms.

Here we get the value as a dictionary with degrees, minutes and seconds, and print these out formated like 31° 12′ 32″. Note that the minute and second symbols aren't ordinary single and double quotes but I have used the prime and double prime symbols borrowed from mathematical notation.

Here we just call _seconds_from_dms, as in __init__. The method isn't used here but might come in handy if you wish to reuse an instance of the class with different values.

This method splits self._seconds into degrees, minutes and seconds, returning the result in a dictionary.

We calculate degrees by floor-dividing (ie // which rounds the result down to the nearest integer) self._seconds by 3600. minutes is calculated in a similar way from the remaining seconds, and finally we calculate seconds from whatever is left over.

This is used in __init__ and set, and combines degrees, minutes and seconds into a single seconds value.

We use this while replicating Eratosthenes' workings, and it calculates the fraction of a circle the current angle represents.

This method sets the current angle to the difference between 2 other instances of Degree, and is used in this project to calculate the angle between Alexandria and Syene.

Units divided into 60 sub-units are a pain for calculations so this function calculates the angle with decimal fractions, for example 07° 12′ 00″ is converted to 7.2 degrees.

Now we have the Degree class in place we can go ahead and use it to calculate the size of Earth, just as Eratosthenes did over two millenia ago.

I have actually carried out two separate sets of calculations, firstly with the values and units Eratosthenes would have used and secondly using modern values and units.

The first chunk of code carries out the following steps:


These values are then printed.

Next let's carry out the calculation in a slightly different way, and using exclusively modern units and values. These are the steps involved.


Finally we just print the variables.

Let's Try it Out

Now we can run the program with this command.

This is the end result.

The currently accepted value for the circumference of Earth is 40,030km. Eratosthenes' value assuming Greek stades is therefore somewhat off at about 15% too high but still pretty good. His Egyptian stades estimate is far better at about 2% too low.