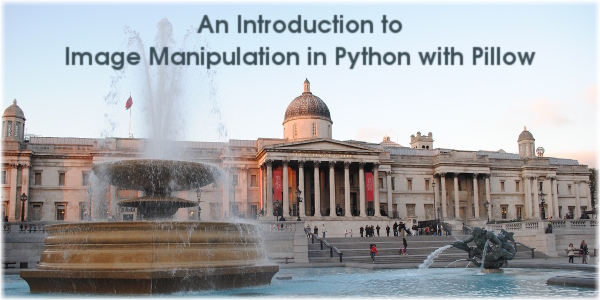 Pillow describes itself as "the friendly PIL fork", PIL being the now-defunct Python Imaging Library. Fortunately Pillow is still very much alive and provides comprehensive image editing functionality. You could in principle use it as the basis of a sort of lightweight Photoshop type application using perhaps Tkinter or PyQT, but its typical use case is for back-end processing, for example creating thumbnails and adding logos or watermarks to images uploaded to a website.

Despite its powerful and comprehensive abilities it is extremely easy to use and in this post I will introduce what to most users are likely to be its most useful features.

In this post I will cover the following topics:

You can install Pillow with pip using the following command. Note that the version is specified here; at the time of writing (October 2018) omitting the version number will cause a VERY old version to be installed. (You might want to check that 5.3.0 is still the latest version when you install Pillow yourself.)

The Pillow site https://python-pillow.org is rather minimal but does provide links to the more important stuff, primarily the documentation at https://pillow.readthedocs.io/en/stable/. Although fairly comprehensive the documentation is a bit vague in places so you might need to experiment with the more specialized parts of the library.

Create a new folder and within it create an empty file called pillowintro.py. You can download the source code as a zip or clone/download from Github if you prefer. In this file we will write a number of functions to demonstrate various manipulations on this jpeg image of the National Gallery in London. This image is included in the download zip and the Github repository. 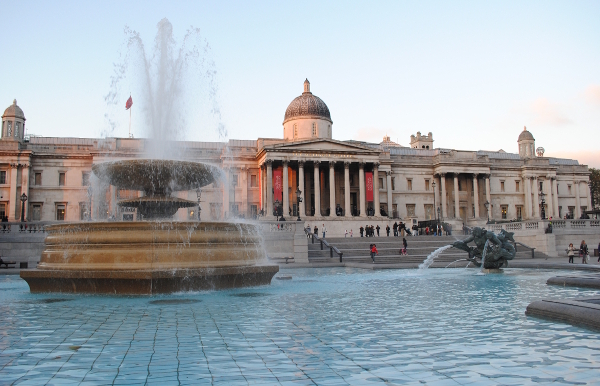 Open pillowintro.py and type or copy/paste the following code.

Pillow consists of a number of different modules and uses the name PIL rather than Pillow to maintain backwards compatibility with PIL. Here I have imported PIL to retrieve the version number, and Image and ImageEnhance for the actual image manipulations.

The main function prints a heading and the current version of Pillow before creating a variable to hold the image file name. After that we just call a number of functions, most of which are commented out at the moment so we can run them one at a time.

The info_and_copy function takes two filepaths, the existing image and the file to save a copy to. It calls Image.open (Image being the core Pillow class) which returns an image if successful. The image contains a number of attributes which are then printed out. The image size can be retrieved in two ways: using size which returns a tuple or using the individual height and width attributes. The Image class is "lazy" and does not load data from the file until it actually needs it, therefore if you just need to see the image information you will not waste memory loading a large image you don't actually need.

We then call the image's copy method which (obviously!) returns a copy. Finally we call the save method on this copy. It isn't strictly necessary to create a copy - we could just call save on the original image with the new filename but I have used a copy here just to demonstrate the method. Perhaps unusually we do not need to tell the save function the format as it deduces it from the filename extension so for example you can convert a JPEG to a PNG just by specifying a filename ending with .png. If you open the folder containg the source code and image file you will find a copy of the latter has been created.

This short function actually needs two exception handlers. The first for IOErrors deals with invalid filenames and the like while the second for ValueErrors deals with situations where the save method cannot deduce the format from the filename extension.

We now have enough to run so do so with this command.

This will give us the following output.

Now we can get into doing some image manipulations, starting with the resize function. Again this takes an input and an output filepath and calls open and save with the same exception handling as info_and_copy. These are common to all the subsequent functions so I won't mention them again.

The Image class's resize method takes a tuple containing width and height (this is a common pattern in Pillow). I have used a width of 100 and a height calculated from the original image's height/width ratio to maintain the shape. This is cast to an int in case the division gives a decimal.

Comment out info_and_copy in main, uncomment resize and run the program again. I won't show the console output as it's very boring but you will find this image has been created in your folder.

There is actually a better way of creating thumbnails, by using the thumbnail method. This takes a tuple with the maximum width and height and does the calculation to preserve the size ratio for us. Most Image methods return a new object but thumbnail edits the existing image, although we can create a new file by passing a different filename to the save method. There are several quirks and inconsistencies like this in Pillow.

Run the program with the thumbnail function uncommented in main and we'll get this image.

If you look closely you'll see that this image is slightly smoother than the one created using resize. The resize and thumbnail methods both have optional resample arguments so evidently use different defaults. This is a slightly more advanced topic I'll look into for a later post.

The rotate method's first argument is the angle in degrees to rotate anticlockwise. There is also a second optional argument called expand. If this is omitted (or set to 0) the height and width of the image are left unchanged which means that unless the image is an exact square you will lose some of it and leave some space empty. This is unlikely to be what you want so you will generally need to set expand to 1 as I have done here.

Run the program with rotate uncommented and you'll get this, the image rotated by 270°: 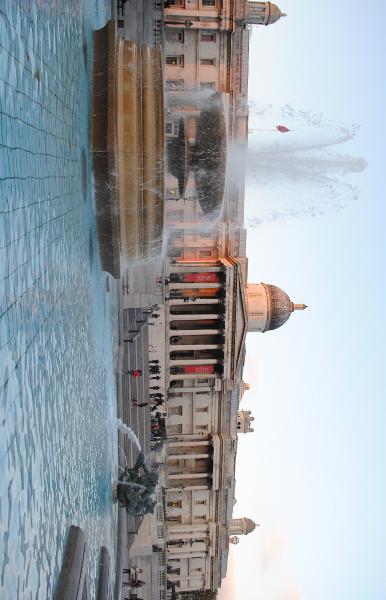 The crop method takes a tuple of 4 coordinates specifying the top left and bottom right corners of the rectangle the image should be cropped to. Obviously the latter needs to be to the right and below the former, and both need to be within the original image. The documentation does not say what happens if they are not but you might like to experiment if you have nothing better to do...!

This is the image resulting from running this function. 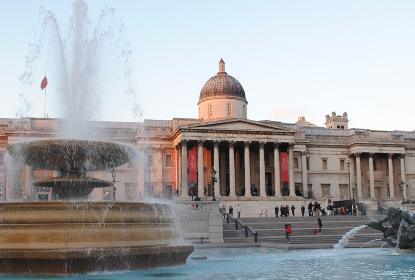 The putpixel method gives you ultimate (but slow) control over an image by allowing you to set the colour of any pixel. This is another in-place method as modifying a pixel and returning a new image many times in a loop would bring things grinding to a halt. The first argument is a tuple of the x and y coordinates of the pixel, the second a tuple of RGB values, or a single value for single-channel images, or RGBA values for an image with transparency. To get the value of a pixel you can use the getpixel method.

Here I have used a loop to draw a horizontal line of red pixels half way down the image. Not particularly useful but it does illustrate that in principle you can edit or create an image one pixel at a time. To create drawings with lines, circles etc. Pillow provides the ImageDraw module. 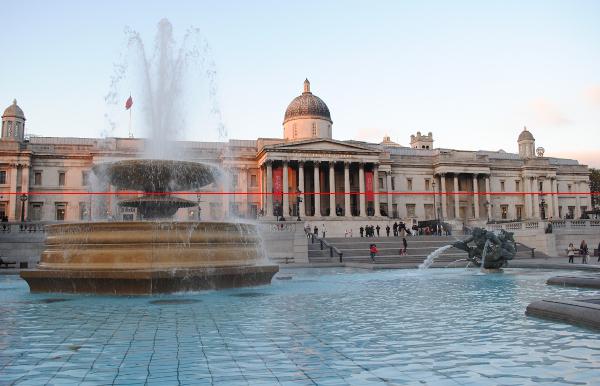 Now lets look at the more advanced functionality provided by the ImageEnhance module, starting with ImageEnhance.Color. This could perhaps have been more accurately named Saturation, and like the Contrast, Brightness and Sharpness classes I'll look at in a moment it returns an object providing an enhance method. This method takes a numeric argument specifing the amount of the enhancement; the documentation is vague about any minimum and maximum values but in all four cases 1.0 means no change, lower values giving a decrease and higher values giving an increase. Generally values between 0 and 2 are all you are likely to need, with values outside this range giving extreme or odd effects.

In the case of color, 0 reduces the image to black and white and values less than 0 actually give a negative coloured image. Values of more than one increase saturation, for example 2.0 increases saturation to the rather garish level you can see below. Go beyond 2 at your own risk! 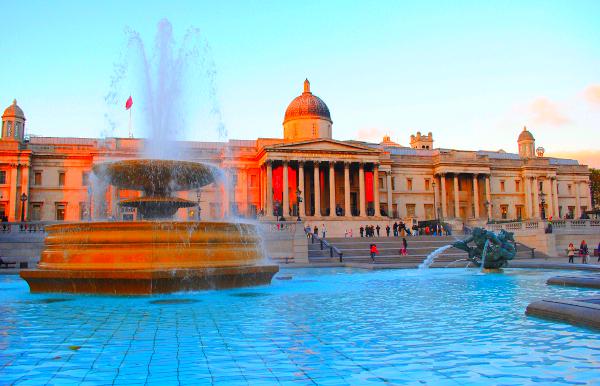 This works in the same way as Color. Values between 0 and 1 give various levels of decreased contrast with 0 itself giving plain grey, while values above 1 give increased contrast. As with Color, values below 0 give a negative effect. This is the unpleasant result of increasing contrast to 2.0. 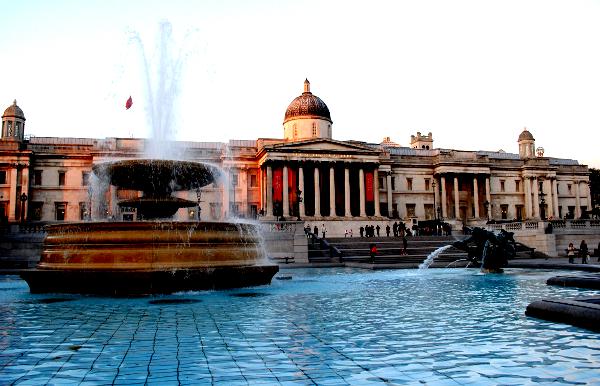 Values of 0 and less give a completely black image, whereas values between 0 and 1 give an image with reduced brightness, for example this is the image with brightness reduced to 0.5. Values over 1 increase brightness. 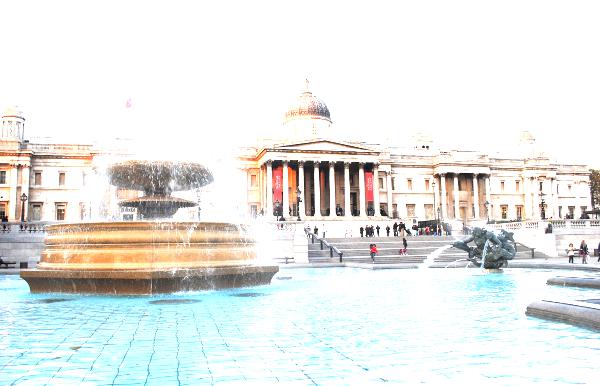 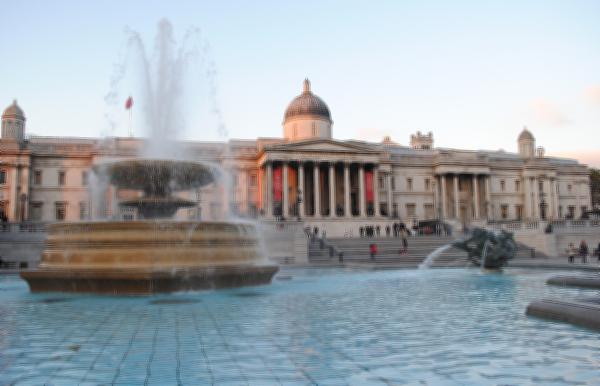 Included with the download zip and Github repo is a small PNG called watermark.png. This is it:

And this is it pasted onto the National Gallery image as a watermark. The important thing to remember is that if you want to create your own watermark or logo you will need to give it a transparent background. 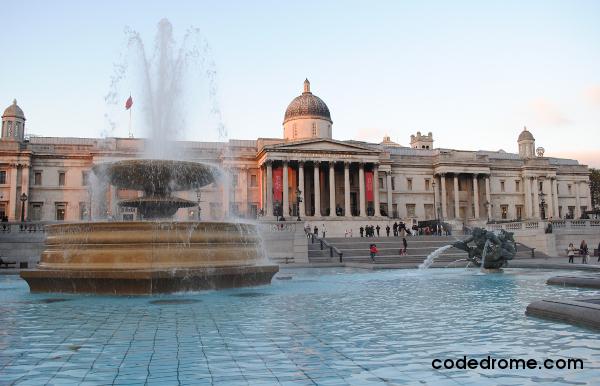 In the add_watermark function we open both images, the filenames of which are the first two function arguments, and then calculate the position of the watermark. However large either image, the watermark will have its bottom right hand corner 16 pixels above and left of the bottom right corner of the image.

Most of the Image methods I used in this project return a new object. This means that we can call several methods in one line of code, for example:

This works because the rotate method is called on the object returned by open, and the save method is called on the object returned by rotate. This is a common technique but one which I prefer not to use too much, although I did it once in the watermark function. This is because I feel that if a line does two, three or more things the code is harder to read and therefore harder to maintain and debug. This is just my opinion and as I said method chaining is common so I thought I at least ought to mention and demonstrate it.

I hope you found this introduction to Pillow useful, but bear in mind that it can do much more and I have a few more articles planned to explore more of the library's functionality.